Our last planned stop of the Kimberley. It didn’t disappoint. Another barred crossing took an hour or so to manoeuvre through the shallow sections – water turbulence made judging the depth near impossible, but we made it without a hitch. Again, like the King George, the initial scenery gave us a taste of what was to come. 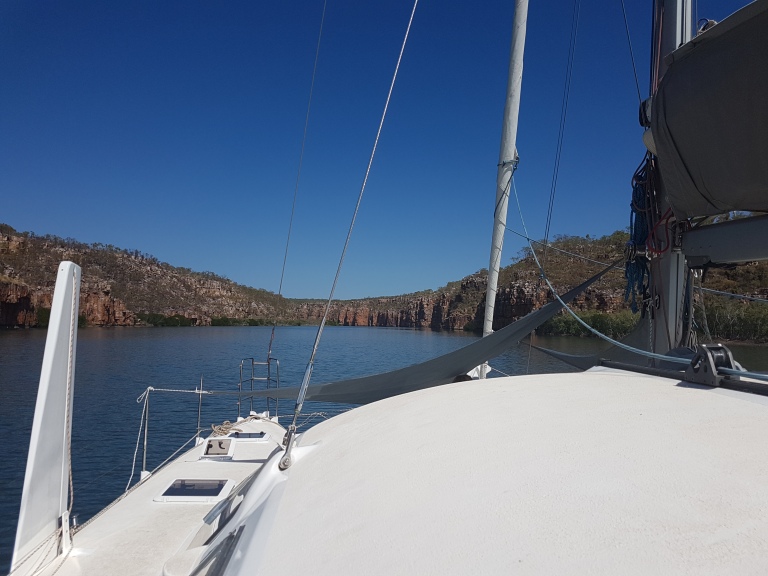 After finding another wonderful anchorage toward the upper reach of the Berkley, we decided to explore by dinghy. More hiking – and the promise of a swim??

After that refreshing shower, we decided to head up to the top of ‘The Amphitheatre’. More spectacular views…

After deciding that the waterfall was the best place we had found so far to cool off, we thought we might even take the shampoo and give our hair a wash! Upon entering the alcove the next morning, we noticed that a log had somehow made its way onto the ledge that we stood on the day before.

After quickly reversing out of the alcove, we were not going to let that log ruin our prospects of a hair wash. He/she received a move-along notice from above, and we were able to get under the waterfall, albeit a more brief hair wash than first anticipated, returning to Gonyonda intact, and ready to head back down the river with the tide.

We anchored for the night at Casuarina Creek, and took a little detour up a small mangrove creek where we hiked again up to some more pools…

The barra from the previous night kept our bellies full as we decided to have one last hike before we set sail for Darwin after lunch. The incoming tide took us up another small creek toward the entrance of the Berkley.

The weather window had arrived to cross the Blownapart (Bonaparte) Gulf. As we headed out of the Berkley on the high tide we were aware of the multitude of memories we had created and were taking with us from the Kimberley. A special place we will hold dear to our hearts for a long while to come.