After sailing through an uneventful night (always good) we were able to watch the sunrise over Barrow Island. Some cloud had appeared overnight, which we were hoping would clear away before entering the Montebello’s, to allow for easier navigation. 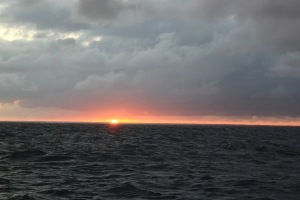 Well the predicted 10-15kn turned into 20+kn just south of the Monte’s, with added tidal movement. So a little bumpy for for the final 15 mile stretch – another glass broken – down to 4 now…

We approached from the west, and planned to enter through Palmerston Point, taking place about an hour after high water. A lovely tidal rip greeted us – registered about 3kn against us, something we weren’t really expecting.

We decided to pull into Claret Cove to anchor for a short while, have lunch, a quick nap, get our bearings and work out an anchorage while we still had a bit of tide to work with (or against).

Decided with the forecast to head up into Stephenson Channel and anchor there for the night. We encountered quite a few more tidal rips (spring tides at the moment)

and navigated through some shallow waters, dodging bommies

to drop the anchor north of the sandbar in Stephenson’s with around a 2kn current. No swimming off the boat kids. They seemed more interested in finishing the DVD I had put on for them when the going got rough?? Never mind, we enjoyed our safe arrival beers in quiet, and retired early to catch up on some lost sleep.

One thought on “The Full Monte!”