After our first night at Willy Nilly Lagoon, we awoke at 5am after the wind had picked up a little, and realised we should have been swinging – but weren’t. Bugger, the tide was still on its way out, and our starboard hull was stuck on the shallow sandbank that bordered the deeper channel we were situated in. The dinghy was sort of deployed quickly… the port bow lassoed, and towed out while we retrieved a bit of chain. Successful. Back to bed, to be woken again shortly by 3 hungry people requesting Weetbix. The wind was howling a bit (photos never do it justice) so we decided to go for a hike on the south end of Hermite Island. Afterwards we explored the lagoon again, and had a feed of yesterday’s fish catch for tea…

The next morning (no sandbar issues) we decided we would brave the chop, and move into Chianti Bay – Alpha Island. The seas weren’t anywhere near as choppy in 20-25kn, so perfect to make our move.

We headed through Faraday Channel – unsurveyed on charts, but with help again from charting authority Google Maps, we sussed out the deeper sections, and slopped our way through on the high tide. Hit a fairly shallow spot at the north end of the channel, but still had around 1.2m of water beneath us. Rounded Macdonald Point – going between Man on a Rock islet – around 3kn of current taking us through… Checked out Chianti Bay quickly and headed through to the back of Bluebell Island to check out an anchorage there. Felt a little shallow for us, as we weren’t entirely sure where we were situated with tide times, so we headed back through the gap between Alpha and Bluebell Islands going about 1.5kn at 3000rpm with both motors, as there was 5kn of current against us! Gotta watch these smaller passes at spring tides!

Chianti Bay is situated on the northern side of Alpha Island – the site of one of the nuclear bomb tests in 1956 – the largest blast at 98 kilotonnes. There are still signs on the beach to restrict visits to 1 hour per day, don’t touch metal objects and avoid making too much dust. Personally I am more worried about the ticks we are finding on ourselves from our beach walks -probably from the small wallabies we have seen hopping about on some of the islands. 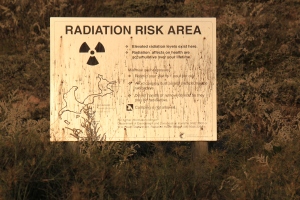 Fears aside, we dropped the anchor in the bay, and tucked into some souvlaki, and of course a bottle of red!